Skip to content
When I get a hankering for some Senegalese food… believe me the urge can be strong! On one such occasions, I had the pleasure of visiting an Atlanta Area African restaurant which specializes in Senegalese named very appropriately “Bon Appetit”. Located on Campbellton Road, a well known area in Southwest Atlanta,this restaurant served one of the best Yassa I have had the pleasure of sampling. On arrival, the restaurant had a familiar feel of home with African prints and fabrics decorating the walls combined with a modern look with the restaurant booth seating.With the sound of African music in the background, the atmosphere beacons any patron to sit back and relax in this slice of Africa. After the wonderful experience of the meal, I had the opportunity of interviewing the very talented chef and soft spoken Oomi Samb. 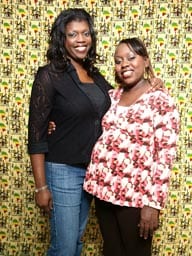 Yeti: Where does this wonderful dish “Yassa” originate from?
Oomi: It originates from Senegal, West Africa more specifically from the city of Dakar.
Yeti: What tribes are the people in Dakar from and is there a specific tribe, whose speciality is this dish?
Oomi: Dakar consists of the Woolof people,the Jola People and the Bambara People. The Woolof people are the true originators of Yassa. They also originated Jollof Rice which is a very popular West- African rice dish.
Yeti: Yes of course, that is where the name Jollof rice comes from….the Woolof people. So tell me more about the Woolof.
Oomi: The Woolof’s are for the most part fishermen. Because of this, most of the original recipes from this area including Yassa was fish based but due to exposure to outside cultures, Yassa sauce is now used with chicken, lamb and other types of meat.
Yeti: I know growing up in Nigeria, we started leaning to cook from our mothers by watching them and learning, almost as an apprentice learns a skill over time. How did you learn how to cook such wonderful dishes?
Oomi: Like you, I learned how to cook early. Girls from ages of 10 to 12 start to cook, clean and learn how to take care of their families. You have to learn how to do everything.
Yeti: If you could give one tip to preparing Yassa, what would it be?
Oomi: My advice would be to use African condiments, like some grilled or dried fish. When you use this in the Yassa, you will not need to add other seasonings like salt or anything and the result will be very flavorful.
Bon Appetit Restaurant is located at 1955 Campbellton Road, Suite A, Atlanta, Georgia. (404)758-7344. Monday thru Friday 9am-9pm. Weekends 9am-10pm. Delivery available..call for more information.