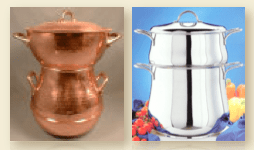 The couscousiere has enjoyed a comeback in recent years along with north African cuisine in the international culinary scene. Couscous once considered exotic and foreign is now commonplace to it stocked in home pantries. For centuries, couscous was prepared using a couscousiere which is believed by scholars to have originated in the sub Saharan areas of Africa sometime around the 10 th century AD. It is now used mostly in North African countries where couscous is used as a staple.

Couscousiere is a double boiler pot with the top part (which has little holes in its bottom) used to cook the couscous and the bottom pot use to cook the stew to serve with the couscous. The steam from the stew infuses the couscous on the top pot with flavors. Using this pot to make couscous can be somewhat labor intensive for a beginner. It is also somewhat expensive and bulky but it is very impressive to look at and it produces the fluffiest Couscous.