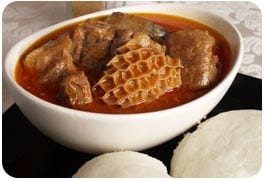 As the heart of the continent, Central or Middle Africa stretches from the rainforest of the Congo River north to the Tibesti Mountains. The region encompasses Angola, Cameroon, the Central African Republic, Chad, the Republic of the Congo, the Democratic Republic of the Congo, Equatorial Guinea, Gabon and São Tomé and Principe. As a predominantly land-locked region, Central Africa experienced very little influence from Europe and the Arab world until the end of the 19th century when Belgium and France developed colonies in the region.

FuFu is a staple of Central African cooking that’s made from boiling root vegetables such as cassava. This thick paste is served with grilled meat and sauces. Cassava also is prepared as cooked greens. Chilis are a popular spice and were introduced to the region during the 16th century slave trade. Popular meats include chicken and beef along with occasional game meats.